The story of Nirvana at Murphy’s Pub

Murphy’s Pub was no stranger to The Music Scene of the late 80’s and early 90’s. The Back Bar, as it’s known, has a stage where many Cincinnati legends have performed. The Tiger Lillies and The Afghan Whigs played in front of many a mosh pit that would form. Other bands were Jesus Lizard, Laughing Hyenas, and The Magnolias just to name a few.

But the band everyone talks about – Nirvana. 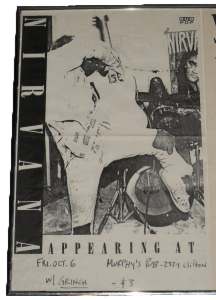 On October 6, 1989, Nirvana was the headliner at Murphy’s Pub in Cincinnati, Ohio, with Grinch as the opening act, for $3 to get in. Sorry, cell phones were not all the rage back then so there are no screenshots or videos. We have pulled some Youtube footage from people that have been kind enough to share. Have a listen:

The current owner of Murphy’s Pub was a bartender at that time. 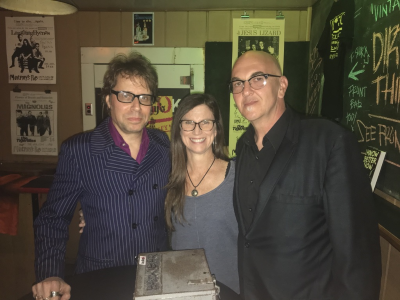 She is pictured here with the manager of that day Joe Winterhalter (right), currently of the Idle Ares, and Peter Aaron (left) who was the in-house booking agent, who then went on to tour with the Ramones, and wrote a book with Richie Ramone: I Know Better Now: My Life Before, During and After the Ramones. Check this out on Amazon.